My Rule for Life

A Rally in the Streets!

This was stolen from my friend and my BIC (Brother in Christ)  the Local Malcontent at:

http://localmalcontent.blogspot.com/  check out his blog. 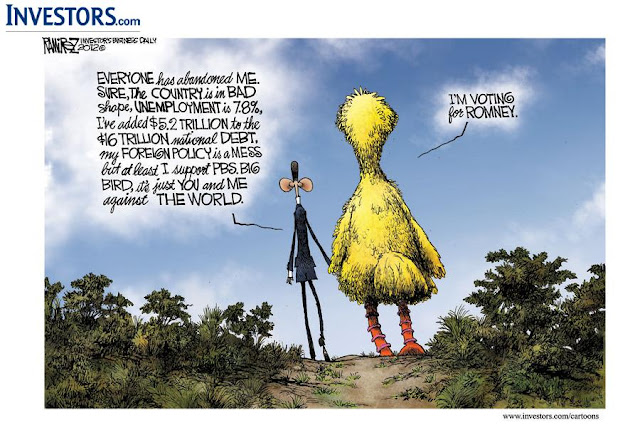 Slightly behind schedule but.......As I had told some of you I planned to attend the Romney/Ryan rally in the town of Lancaster which is near where I live.  Actually I lived there for a few short months while waiting on my then, Army dad to arrange housing for the family in England.  I won't give the dates I lived in England  however, if you are really that interested my sister and I marched in Queen Elizabeth's Coronation parade.  Enough about me and on with the rally in the streets (of Lancaster, Ohio).

I didn't have a ticket (which was free) so I was winging it.  My hope was to get to Republican HQ early enough to obtain one there, which was advertised.  That was my 2nd mistake.  The first was not reading my email completely and thinking the rally would be at the fairgrounds.  This made perfect sense to me as the Fairfield County fair was going on and there is a grandstand and PA system and all that stuff.  Apparently when the Secret Service boys got into town they didn't like the large hills and congestion soooo the Rally was held in the downtown area.  Approximately an eight square block area  was cordoned off and a stage erected right beneath the town hall building with the bell tower.  I guess that gave the Secret Service guys the high ground and allowed quick egress and exit if necessary.

Let me back track here a bit.  Regarding this Post's Title.  On the net this morning I read some very disturbing news about "Tweets".  Personally, I don't "tweet"  or "twit" or give a _hit about what people tweet or twit!  However, it seems hundreds of thousands of "turds" have tweeted or twitted that if President Dope and Shame is not re-elected they are going to riot in the streets.  Several of these "turds" tweeted or twitted that they would assassinate then President Romney should he be elected! I find this a Conservative Outrage!!! I hope  the FBI  and the sober Secret Service agents are out interviewing and arresting every one of these turds. I believe it IS A CRIME, to threaten the President of the United States of America!!!  Clik here for full story. Therefore my counter to the turds that tweeted or twitted is a Conservative safe, "Rally in the Streets! Where the trash is picked up and the place doesn't look like a pig sty after the gathering such as the Obama coronation in Washington DC!!!

Now where was I?  Oh yes, A very nice Deputy pointed me to the VIP table at the check in.  Then a very nice lady pointed me to the Instant Ticket table.  I obtained my FREE and INSTANT  ticket and entered nearly hallowed ground.  You could feel the electricity in the air.  I found a location near the back where I could watch the crowd.  I had just watched the movie The Jackal a couple of nights before and kept looking for Bruce Willis and a white van.  I did spot the Secret Service agent in the bell tower as did several other veterans that had gathered around me.  It seems us older vets just come together somehow like a magnet and iron. Perhaps is keeping your back to the wall or something like that but we all seemed to gather near the back of the crowd.

The actual rally started with the Benediction (bet they don't do that at an Obama rally).  A local Boy Scout troop presented the Colors and then the National Anthem.  My fellow Americans, let me say this about that. My father was in the Army the first 13 years of my life.  I played  varsity high school sports four years and then spent  4 years myself in the Army.  My son, Jacob spend five years with the 82nd Airborne as most of you know.  I say that for you to understand I have heard a few National Anthems sung.  Never, I repeat never in my 64 years have I heard the National Anthem sung by one person with so much enthusiasm, with so much professionalism or so much emotion as I did Friday night.  It brought tears to my eyes and to many of the eyes around me.  And, the very next night it was my pleasure at a local hot dog roast to meet the aunt and uncle of this young woman.  She is on Face Book. I believe she has a CD of it.  I will let you know.

Of course all the local dignitaries spoke before Mr Romney and Mr. Ryan spoke and we all suffered through that with only few minor bruises.  Mr Ryan spoke first and reminded us he was an Ohio college grad and felt like a fellow Buckeye.  The State of Ohio's tree is the Buckeye.  He then introduced Mr. Romney.  OMG!   What a roar, a reported 8000 people in a confined few small town city blocks rocked the buildings!  It was just awesome.  Which is not a very good descriptive word but this ol' country boy ain't very good when it comes to fancy words  ifn yo'al know what I mean.  I just took a picture of the stage, Governor Romney at the podium with the flag waving in the breeze behind him and sent it to my friends.  I captioned it, "This is what it's all about."  God, Country and Family.

Mr Obama, I will gladly "cling to my guns and Bible"  until the day I die and you or no one else will take that away from me.

PS.  I am going to try to post some piks later,  I need help on that from my wonderful daughter.


In my post of  October 2, 2012  I ask my followers and occasional readers to re-read my post of  September 25, 2012.  Today I ask you to re-read both posts and begin to connect the dots.  You need not be a history major to understand how Communism/Socialism take over a country.  It is a plan that has come down through history time after time after time.  It has happened in country after country after country. And... it has cost the millions of people to loose their freedoms and millions more to loose their lives. It is being set up in the United States of America.

Step 1. Elect a radical leader who installs his own radical appointees
Step 2. Take over the media for propaganda purposes
Step 3. Slowly remove personal freedoms
Step 4. Create class warfare/divide and conquer
Step 5. Develop your own military ie; Hitler's Youth/Brown   Shirts
Step 6. Manufacture a crisis and use this as launch pad to cultivate population sectors that support you
Step 7. Refuse to step down and crown yourself El President using force if necessary

Under the present administration steps 1 thru 5 are complete. Step 6 has been tested with the death of an American Ambassador and 3 others.  Now the following article can be the start of Step 6 which will lead directly to Step 7.

The beginning of Step 6.  "US sends troops to Jordon".  Read the entire story at Drudge, clik here.

It is Conservative Outrage's effort to be "fair and balanced"  I am posting a video from an Obama supporter.  This the day after the first debate.  It is strictly being used  to give equal time to the other (liberal) side.

Please leave a comment after watching this brief video.

Clik here to begin.
Posted by ABNPOPPA at 1:55 PM 3 comments:

In my post of August 25,2012 I informed my readers/followers of what appeared to be the beginning of a possible plan to takeover The United States of America should President "dope and shame" lose his bid for a 2nd term.  You see, liberals, communist, progressives, what ever you wish to call them are adapt at one thing.  They take small bites of the apple....eventually devouring it.  This is a plan that has come down through history and has been practiced in South America and the rest of the world for generations.  This my friends is Barack Hussien Obama's plan.  Small bites at at time.  If you would kindly re-read my post of August 25 and add the following two additions you will see the noose tightening around the next of all Americans.

Release people from prison, Fidel Castro, Manual Ortega, Hitler and the list goes on. New item #1.  Bypass the written law.  This president has issued  139 Executive Orders.  These orders are obviously too many to list here.  However, you can  read and search the entire list  for yourself at http://1461days.blogspot.com/2009/01/current-list-of-president-obamas.html.


The Obama administration has acknowledged that it released illegal aliens that were in its custody back into the U.S. population because they claim that these did not “fit” an administrative “priority” for deportation. These illegals were outside the qualifications that were outlined in Barack Obama’s new immigration policy.

Now throw in what may be the beginning of a small war against terror under the guise of the death of a US Ambassador and 2 Navy Seals and a 4 unknown person. Exactly the perfect ingredients for taking over the Internet, the military, and the and the country by FORCE. Declare a nation emergency and you have President "dope and shame" for life! It can happen.

I urge each and everyone of you to do what ever necessary to get the Conservative in your influence circle out to vote.  Regardless of how you feel about Mitt Romney we must rid the country of Obama.

Special request for prayers for my Pastor and his wife.  She has stage 4 breast cancer that has entered her bones in four different places.   Thank you all.

Destruction of the embryo in the mother's womb is a violation of the right to live which God has bestowed upon this nascent life. To raise the question whether we are here concerned already with a human being or not is merely to confuse the issue. The simple fact is that God certainly intended to create a human being and that this nascent human being has been deliberately deprived of his life. And that is nothing but murder.

Read more about this famous Lutheran Pastor at:
http://en.wikipedia.org/wiki/Dietrich_Bonhoeffer

Pray for the Unborn

The field is the world; the good seed are the children of the kingdom;

Hand over my heart for America, yea, right

One in Every Crowd, or Two

On Into the Night We Must Go

Where You're Coming From